Team USA didn’t do so hot at the world fly-fishing championship in Slovenia this summer. Our guys finished 11th out of 26 teams.

I have a theory: not enough New Yorkers on the team.

OK, I’m kidding about that. The unexpectedly poor showing (after coming close to a medal the year before) was more likely due to stiff competition from Europeans, for whom competitive fly-fishing is a way of life, or to the unpredictable nature of fishing itself.

In any case, there will be an opportunity this weekend for a few more New Yorkers to try out for the national team. Team USA will hold a regional qualifier in the Syracuse area, with up to 28 anglers fishing West Canada, Chittenango and Nine Mile creeks from Aug. 24-26.

It’s the first qualifying tournament in New York since Team USA began consistently fielding a team for the world championships in 2008. Its organizers need help — fly-fishers who can serve as controllers, who accompany individual anglers and make sure all fish are caught fairly, accurately measured and properly released.

I can’t be there, but if I could, I’d jump at the chance. You can learn an awful lot by watching another angler fish, especially if the angler is good enough — or at least has reason to think he’s good enough — to compete with the best in the world.

The whole idea of competitive fly-fishing is held in low regard by a significant number of fly-fishers. But more and more anglers are starting to like the idea. There’s a league, the TroutLegend Competitive Fly Fishing League, that’s been around for several years, sanctioning local events (”mini-comps,” as they are known) and keeping track of anglers’ standings. There are teams around the country with names like Trout Slayer, Appalachian Anglers, Kingfishers and Motley Crew.

Meanwhile, there seem to be more and more local, less organized contests taking place every year, often as benefits for worthy causes or tourism promotions. The Two-Fly Challenge on the West Branch of the Ausable was held for the 13th time this summer, and this was the fifth year of Friends of the Upper Delaware River’s One Bug Fundraiser. A newcomer, the Trout Power tournament/creel census on the West Canada, was launched this year.

“Competitive fly-fishing in the U.S. has really taken off in the last 18 months,” said Ken Crane of Syracuse, organizer of the coming regional and a competition angler himself.

The ultimate goal, he said, is to put in a bid to host the 2015 or 2016 national championship here in upstate New York. (Property owners, especially along West Canada Creek, have been generous with access to the water for the regional tournament, he added).

Even if competing in a fly-fishing tourn­ament or rooting for an angler or team isn’t your thing, Crane said, the methods and equipment developed for fishing contests are having an impact on purely recreational angling.

Many competitions forbid the use of split shot on leaders, for example, so anglers in Europe and now in the States have elevated the procurement and use of heavy tungsten beads in designing nymphs that are catching on with the public, like Lance Egan’s Rainbow Warrior. Some contests ban strike indicators, so the concept of a “sighter” has been introduced to American anglers — a short, coiled section of brightly colored monofilament in the leader that helps the angler follow the progress of his fly.

In fact, the whole wave of Czech- or European-style nymph fishing that swept across the United States in the past few years began in the tournaments of Europe, as Americans saw how effective a simple, heavy nymph with a bright “hot spot” could be when fished on a short line.

Last week, Crane said the Syr­acuse regional qualifier had two competition slots open and needed eight or 10 controllers. If you’d like to get involved either way, contact Crane at (315) 725-7392 or kcrane377@gmail.com.

Morgan Lyle’s commentary appears regularly in The Daily Gazette. Reach him at morganlyle@gmail.com.

In case you haven’t heard, there’s a new category of tenkara rod available — one that’s not even really intended for trout fishing, but that turns out to be great for fishing small streams for small wild trout.

The model I used is the Soyokaze by Daiwa, a brand well-known in the U.S. for spinning and casting rods and reels but which doesn’t (yet) sell any of its telescoping, fixed-line rods here. Daiwa’s higher-end tenkara rods are the sweetest tenkara rods I’ve ever cast, and they can be bought (as can the Soyokaze) at TenkaraBum.com.

There’s debate about whether rods like the Soyokaze can properly be called tenkara rods at all, since they don’t have cork handles — just a slightly fatter blank at the butt end, with a non-slip coating — and they are shorter than tenkara rods: six to 10 feet instead of 12 to 15. I gather these smaller ones are known as tanago rods and are used for anything from panfish down to minnows.

The Soyokaze model I used is an unbelievably light 9-footer that’s just right for dropping a Usual in pockets the size of a dining room table on a small, shady, rocky stream full of fallen tree trunks, where all the trout are wild. I know there are a couple spots on this stream where it’s possible to catch larger trout. I didn’t use the Soyokaze for them; I broke out the Tenkara USA Ebisu, my all-arounder, instead. (They weren’t biting anyway.)

Little six- to eight-inchers are the norm here. 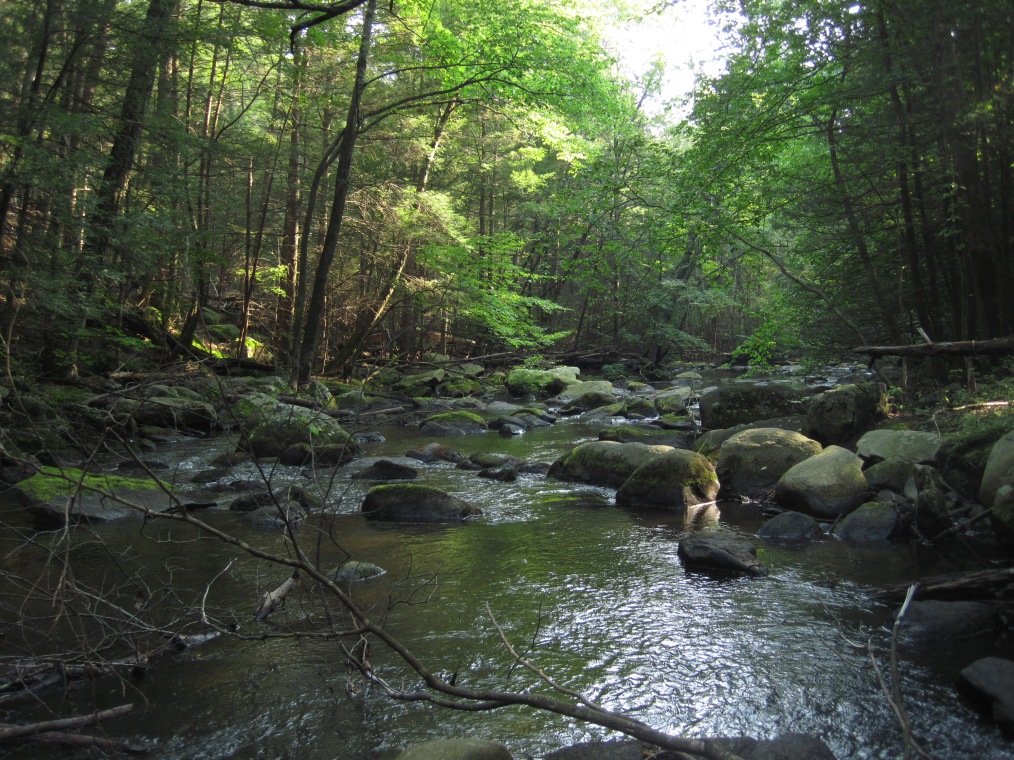 Won’t be fishing the pool below the falls anytime soon — it’s full of oak tree. We’ve had some hellacious thunderstorms around here this summer.